Cooperatives for Economic Justice in Black America with Jessica Gordon-Nembhard 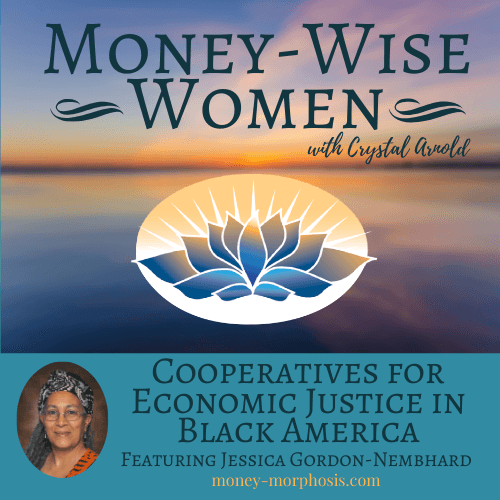 The Freedom Quilting Bee was established in 1967 in Alabama. It is a handicraft cooperative founded by Black women in sharecropping families who needed to supplement their meager incomes, creating and selling exquisite quilts. In 1968, the cooperative bought 23 acres of land on which to build their sewing factory. They provided day care and after-school services for members’ children. The cooperative ownership of land provided members with independence and improved their well-being.

These Black families were stronger together because they lifted each other up. Through joint-ownership, they built true wealth.

There is a fascinating history of marginalized minorities using cooperatives to become resilient. “Money-Wise Women” guest Jessica Gordon-Nembhard is a political economist specializing in community economics. She is the leading expert on the history of Black cooperatives, one of the greatest unknown stories of economic success in America: Collective Courage: A History of African American Cooperative Economic Thought and Practice. 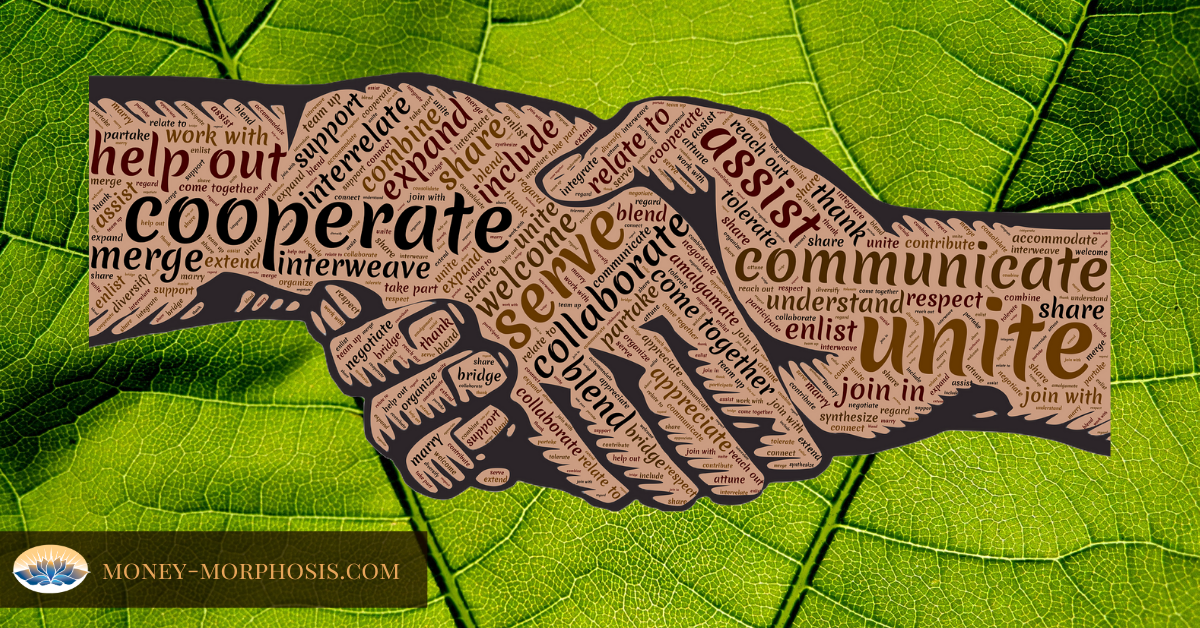 In the 1990s, Jessica became involved in the movement to reduce the racial wealth gap in America. She then began to focus intently on the cooperative movements, credit unions, and the solidarity economy. These organizations created economic stability while encouraging caring behavior.

An intriguing thing happens when people get involved in cooperatives. Their lives get better. People improve their mindset, quality relationships are developed, and there are positive externalities, or “spillovers” as Jessica calls them. The benefits extend beyond the immediate owners, as witnessed throughout the late 1920s-1940s across American cities when Black cooperatives became popular. Black people turned to each other out of necessity and established school co-ops, farm co-ops, marketing co-ops, grocery co-ops, gas station co-ops, housing co-ops, credit unions, and mutual insurance companies.

Throughout American history, when times get tough and neighborhoods become violent, people actually need each other more than ever.

In 1992, South Central Los Angeles there was the scene of an uprising of anger from the Black communities following the police acquittals in the Rodney King case. From this turbulence emerged “Food from the ’Hood (FFTH),” a student-led co-op at Crenshaw High School in Los Angeles. FFTH started a school garden and gave the produce to their low-income neighbors. They began to sell vegetables and salad dressings at a farmers’ market. The student co-op owners mentored other students, and the co-op continued even as the original students graduated. Those who were involved developed greater confidence in their ability to contribute value to their community.

As Jessica explains, “Cooperatives and credit unions recognize and develop internal capacities of both the individual and the community. This creates mechanisms that distribute, recycle, and multiply local expertise and capital within a community, creating a solidarity economy.” 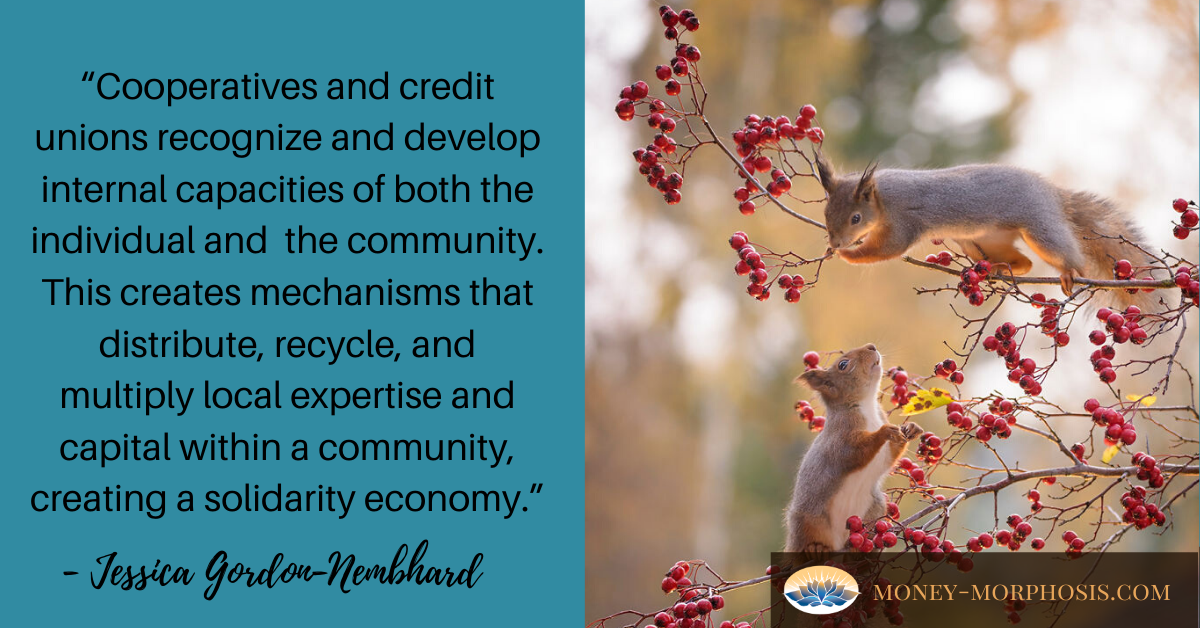 This approach is especially powerful for people of color. American racial wealth inequality has been hidden and disguised for centuries. It became painfully obvious in 2008, when the foreclosures of subprime mortgages peaked at 2.87 million. The brunt of this burden was borne on black and brown shoulders. The median net worth of American households in 2009 was: $113,000 Whites; $6,325 Latino; and $5,677 Blacks. Just four years earlier, Blacks had been at $12,000. The value was literally sucked out of Black communities by predatory lending.

Jessica knows another way is possible. She says, “In this period of mortgage and housing crises, with housing values down and interest rates decreasing, rather than a time of retrenchment, with the right policies in place this could be a time to responsibly increase low-income home ownership through co-op housing. Combine that with using credit unions as the mortgage lender, and you have created a system of interlocking cooperation and reciprocity that keeps resources circulating in the community and among community residents. This is the opposite of what happened.”

Listen to this episode to learn more about the fascinating history of African-American cooperatives. Through her research, Jessica shows shining examples of what the human spirit is capable of when we work together to bring out the best in one another. 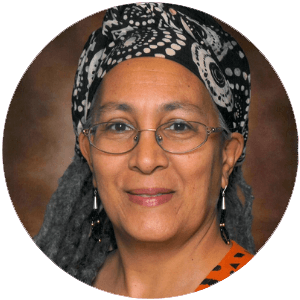 Jessica Gordon-Nembhard is a political economist specializing in community economics, Black Political Economy and popular economic literacy. Her research and publications explore problems and alternative solutions in cooperative economic development and worker ownership, community economic development, wealth inequality and community-based asset building, and community-based approaches to justice. She wrote about Black cooperatives in Collective Courage: A History of African American Cooperative Economic Thought and Practice. She is a professor of community justice and social economic development in the Department of Africana Studies at John Jay College, New York City, where she is also director of the McNair Post-Baccalaureate Achievement Program. She is an affiliate scholar at the Centre for the Study of Co-operatives at the University of Saskatchewan in Canada, where she is co-investigator for the “Measuring the Impact of Credit Unions,” Community and University Research Partnerships (CURA) project; and she is an affiliate scholar with the Economics Department’s Center on Race and Wealth at Howard University.