Myths of the Gender Pay Gap with Anna Rova 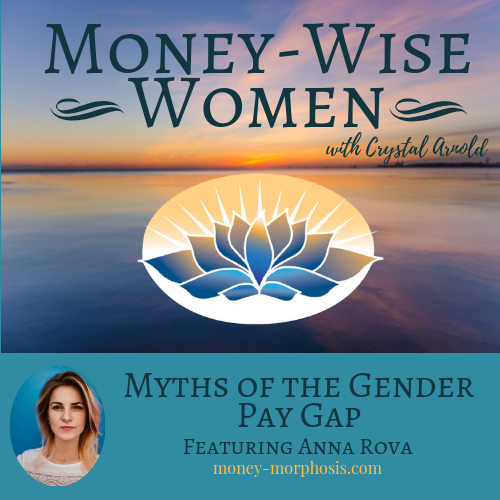 There are stories behind every statistic. One thing I learned in economics is that the questions you ask determine the answers you find in the numbers. Statistics are subjective.

What’s really going on with the gender pay gap?

“Money-Wise Women” guest Anna Rova is the founder of Girlskill, an online media platform, publication, and podcast empowering women to connect to their femininity. She has a unique perspective, having grown up during the communist era in the Republic of Moldova, beside Ukraine in Eastern Europe.

Read Anna’s most controversial article, “The Myths of the Pay Gap, Sexual Assault Stats and Oppression of Women” here. She breaks down how the gender pay gap is calculated and brings nuance to a conversation which is over simplified to be sensational.

“The pay gap does exist, but it is not accurately portrayed.”

American women are paid on average 80 cents, and Latina women 54 cents, for every dollar a white man makes. Anna explains that women tend to prefer jobs that are more nurturing with lower risk and stress. Teaching jobs, linguistics, the service industry, and the healthcare sector are some examples of such jobs preferred by females. There are also the biological differences and the effects of childbearing on lifetime earnings.

Many women began to work outside of the home during the American feminist movement in the 1970's. By 1981, there were more dual-income households than otherwise. Since then, the cost of education, healthcare and housing has risen at a faster pace than total compensation. According to a recent assessment by Forbes, in 40% of U.S. households with children under the age 18, women are the primary or sole breadwinners. In the median American household with a mother working outside of the home, women contribute nearly 40% of their family’s total earnings.

But what’s the expense to our quality of family life because of the financial pressure for women to earn like men?

Anna points out how over-generalization that the patriarchy is the enemy is counter-productive. She encourages us not to erase difference between the genders in a misguided search for equality between the sexes. Pregnancy and child-rearing should be honored as unpaid service through better maternity-leave policies.

There is power in digging deeper beyond the numbers and looking at the cultural and biological factors that lead to a measured outcome, because the true value is in the stories underneath the statistics.

Anna Rova is a “Feminine Embodiment Coach,” on a mission to redefine female success. She helps women connect to their feminine core and live a life of fulfillment, freedom, and flow. She is a writer, podcaster, yoga instructor, and location-independent entrepreneur. Anna is the founder of Girlskill, an online media platform, publication, and podcast empowering women to connect to their femininity and womanhood through various stories of women around the world.

A former email marketer, she loves being on stage and sharing her knowledge about relationship dynamics, feminine/masculine energy, and the power of feminine embodiment. Born and raised in Eastern Europe, she believes in creating a thriving community of conscious and awakened women through providing inspiration, tools, and resources that will help us all build a better, more sustainable world where femininity is a strength and not a weakness. You can access Anna’s free webinar here.