The New Economy Coalition: Building Wealth from the Bottom Up with Kelly Baker 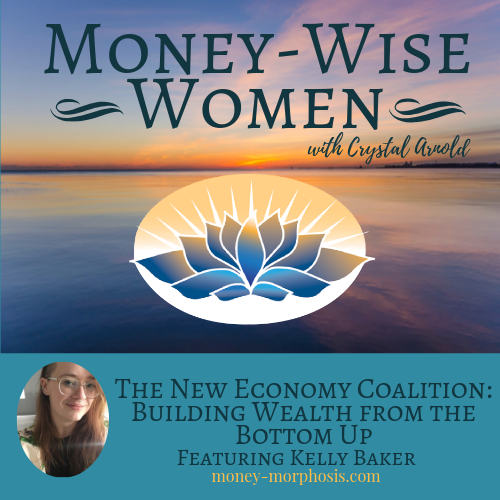 Building wealth from the bottom up in local communities is essential for improving the well-being of people. Trickle-down economics is a lie that allowed the extraction of wealth from communities during the last several decades. With the passage of NAFTA in the 1990s, corporations abandoned domestic production across America to chase profits through cheaper labor overseas. In Buffalo, New York, the local economy languished and unemployment rose dramatically when industries left. Then local organizers took a whole-systems approach to economic development and began innovating with worker-owned cooperatives, business incubators, and a community land trust program.

People experience the joy of belonging as they invest in the well-being of their families and communities.

“Money-Wise Women” guest Kelly Baker is the interim co-director of the New Economy Coalition,  a national network that is building solidarity and encouraging policy change. They connect over 200 organizations with effective strategies for economic justice.

Kelly says, “The New Economy Coalition is bringing wealth and decision-making into communities. We have a bird’s-eye view of what’s happening across America’s new economy movement through a network of people around the country. We have a menu of policy options that are often not being advocated. We see what’s happening on the front line of economic and ecological disasters.” 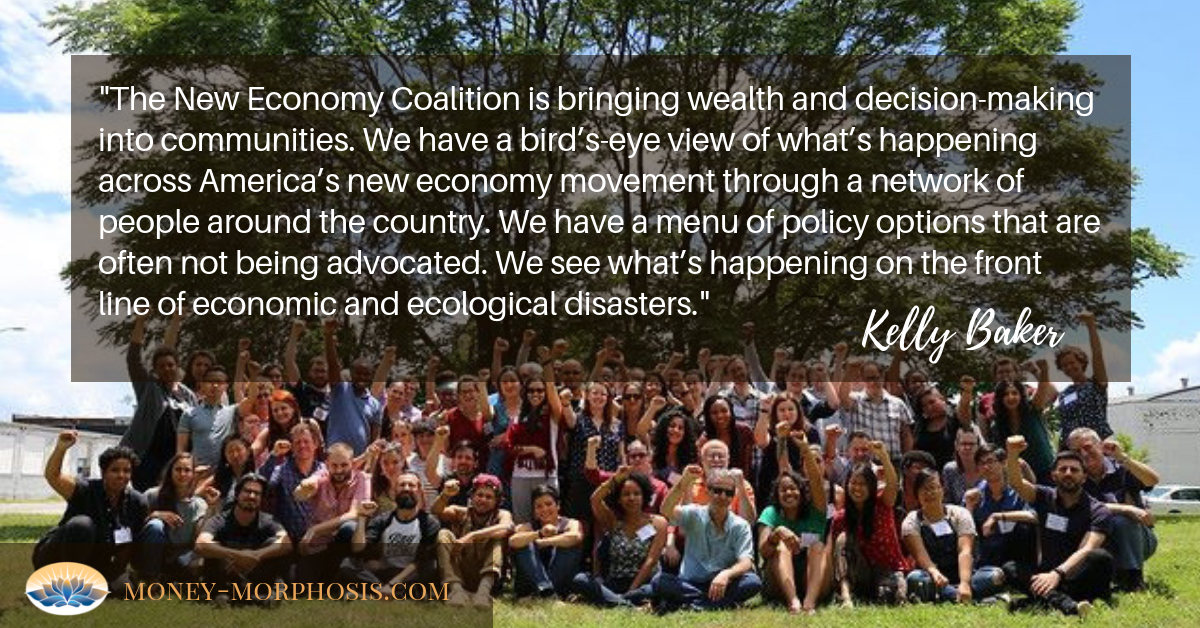 It is essential to address systemic economic inequality and how it contributes to both racial and environmental suffering. We must transcend the old paradigm of either capitalism or socialism, because this false polarization is a distraction from other approaches. True wealth is created as communities focus on how to cooperate in caring for each other and stewarding resources more responsibly together.

“The New Economy Coalition aims to create jobs, housing, cooperatives, and funds where people have direct say in how those resources are distributed and have ownership of their own labor and time. Let’s create an economic ecosystem where solidarity is the baseline and we enable people to cooperate more effectively.”

Feminine leaders bring the heart back into the economy through integral relationships. Prosperity is more than numbers measuring growth. The well-being of our living ecosystem on Earth includes the health of children, elderly, soil, and water.

Riane Eisler is a cultural historian, systems scientist, educator, attorney, speaker, author, and founder of the Center for Partnership Studies. Her multi-disciplinary approaches move beyond polarized thinking of right versus left, capitalism versus socialism. Her extensive research shows how the partnership system and domination system are the two underlying structures of politics and economics. She explains how the real wealth of nations is built upon the caring economy. Her work provides the philosophical underpinnings for a partnership system that emphasizes the health and well-being of women, children, and the Earth we call home.

Riane’s research has lead me to believe that fully valuing the work of women is essential. It’s time to disengage from systems of domination and to participate in partnership systems that value everyone’s contributions.

Kelly says, “Sharing, gift economy, and caretaking are still economic activities. Modern capitalism has put primacy on paid labor in the professional world. Entire swaths of economic activity that are predominantly done by women have become invisible because they are often unpaid or undervalued.”

The New Economy Coalition believes that economic justice in America includes returning stolen money and land. The Southern Reparations Loan Fund is one group who is returning wealth to the descendants of slaves. This fund makes business loans to cooperatively owned businesses that are anchored in predominantly black communities in the South.

Strengthened by their association with the New Economy Coalition, communities are taking innovative approaches to create more vibrant local economies. In Buffalo, two non-profits that are leading this movement are Open Buffalo and Cooperation Buffalo .

As we value the work of caring for people and planet, we create a legacy of true wealth and feel the joy of belonging.

Kelly Baker is the interim co-director of the New Economy Coalition, a national network that is building the collective power of the new economy movement in the United States. The New Economy Coalition is a network of 210 organizations who are imagining and creating an economic system that puts people and the planet before profit.

A Boston native, Kelly has spent most of her career securing resources for the non-profit sector in Greater Boston. Before joining the New Economy Coalition, she worked in development and communications at youth after-school programs, including ZUMIX, Sociedad Latina, and Science Club for Girls. Kelly is particularly interested in the transformative role that philanthropy and wealth redistribution will play in the new economy.