How to Flourish in the Gig Economy with Sarah Silbert Hinawi 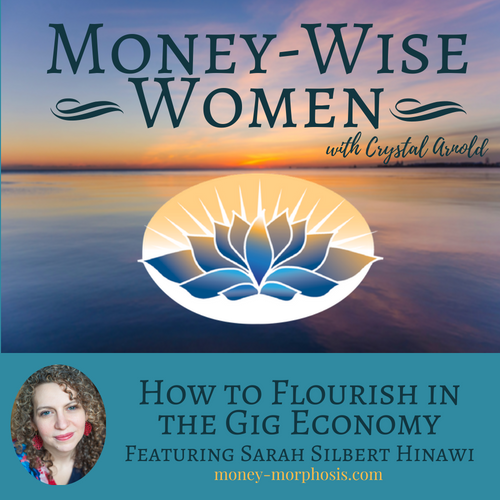 A new era of the gig economy is emerging, in which labor is performed at home by self-employed contractors. It boasts freedom, flexibility, and creativity. Yet these independent contractors, including on-demand service providers, small business owners, and consultants, need particular skills to face unique challenges. Many often worry about fluctuating income and maintaining their reputation. A lot of companies are moving their employees into this kind of consultant relationship without benefits.

What are the skills women need to flourish in the gig economy?

“Money-Wise Women” guest Sarah Silbert Hinawi educates primarily women on how to participate in the gig economy effectively. She is passionate about self-directed learning, and is co-founder of Purpl™, a business incubator. She focuses on program design, business development, and strategy in areas of education management and human development.

“The gig economy is an era, not just a segment of the population.”

Approximately 150 million workers in North America and Western Europe have left the stable confines and security of organizational employment—sometimes by choice, sometimes not—to work as independent contractors. These pioneers aren’t just focusing on getting things done and sold independently. Although they don’t have traditional benefits or stability afforded by steady jobs, many value flexibility and freedom and are driven by self-purpose.

What is the future of work? Forty percent of American workers are now independent contractors or self-employed, and this is estimated to rise to 60% by 2025. Automation is changing the jobs available to humans. Productivity is not only about financial renumeration; it is about making meaningful impact local communities and ecosystems.

Self-directed leadership is key in this era. Sarah says, “We’ve defined success in the hierarchy as advancing within an organization structure, but this doesn’t serve the needs in a rapidly shifting economy. We must inquire how we can have more agency and forge our own paths.” Advocates at Purpl™ design methods for self-direction and engagement in learning, life, and work.

The most common challenge Sarah has seen in women entrepreneurs is undercharging.

It can be hard to assert your value and set your boundaries with time.

Listen to this episode of “Money-Wise Women” and learn the secrets to success in the gig economy. Masterful storytelling, self-knowing, and empathy are key leadership skills that will assist you in flourishing in this emerging era of greater self-determination. Sarah Silbert Hinawi, EdM, is the co-founder, director and chief learning officer at Purpl™, a small business incubator, and GELL (Gig Economy Learning and Leadership). This work stems from a long career in both the for-profit and non-profit sectors, focusing on program design, business development, and strategy in areas of education management and human development, specifically programs that support individuals’ ability to actualize their potential and be self-directed in their learning and work.

She has been instrumental in the growth and success of a number of national and international student-centered programs. including the Columbia University TeenScreen Program, LitWorld, and the College Board’s college and career-planning curriculum, College Ed. She has served on the Board of the Institute for Democratic Education in America and the Next Generation Committee for the Association of Small Foundations, and recently served as a Leadership Expert in Residence at TED. Her new model for leadership in the gig economy is the topic of a TED talk and a book that is currently in development. She facilitated peer-to-peer mentorship groups and consults with organizations to help founders, independent workers, students, and organizational staff develop the competencies to thrive in the new world of work by being self-led.